There's an election today in Venezuela, but don't get excited. We all already know that the Socialist dictator Maduro will win by an estimated 8m votes - his cronies have been forging ballot papers and stuffing ballot boxes all week. Corrupt elections are one of the first changes that Socialists make to democracies. Little Owen Jones would no doubt rationalise electoral fraud as legitimate just so long as it's to cement Socialist power - anything, including genocide, is OK for lefties.

On that subject, can you imagine Pete Waterman, for example, making a comedy movie about the extermination camps, with Hitler, Goebbels, Jodl, Ribbentrop and the rest of the scum Nazi gang played by comedic actors? Yet Armando Ianucci, a man of supposed talent and intelligence, takes great pride in doing so about Stalin. It's part of the Socialist rehabilitation of Stalin's Soviet Union. Thirty millions exterminated? It's fine, it's OK, they were killed by Socialists, not Nazis, we're told. I'm showing it to my young German chums next week and I'll let you know their reaction.

On social media, on the streets, and now even on mainstream broadcasts the spite, vituperation, hate and sheer nastiness of the left is in the ascendant. It's chillingly reminiscent of the early days of the NSDAP. Bullying opponents, intimidating democratic debate, shouting down contrary views are all becoming normalised. 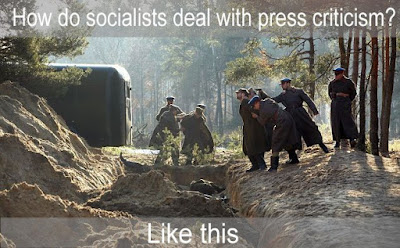 
Only if we let them.

A decent PM rather than the FFC would easily see ZaNu off for good. Their party may have grown to 400,000 but that is likely their full strength because the vast majority of the marx-shite that sane Labourites have kept down for 100 years are now boosting their ranks. 400 thou pieces of shit is not too bad for a country of 70 million.

If we had against them actual Conservatives instead of BluLabour womiccumalobus dross led by a female creature who regularly has her gob wrapped around cultural Marxist jargon and bullshit--"mansplaining" being a recent example--ZaNu would be in trouble from the off.

Not a lot of people know that

Fret not children, PMT.May seems determined to see JC as the next PM and with powers Maduro would think excessive.

disMay is possibly a worse threat to free speech than corbyn. The one thing she is undeniably incapable of is fixing elections.

Mexico go socialist?
Mexico has been a socialist nation since the revolution of the 1920s.
Mexico’s main political parties are named after the revolution.
Nationalisation of everything has been a facet of Mexican politics for almost 100 years.

The socialist experiment tells you all you need to know.
Trump isn’t planning on building a wall to keep Americans in the USA.


Trump isn’t planning on building a wall to keep Americans in the USA.

Bill Q, you are of course correct, the situation is very similar to the current bluliebour govt in yUK. Vote for whomever you wish, you always get liebour. Some parties are more honest about their provenance than others.

Regarding President Trumps purported wall, I fear it will come too late, despite my best efforts to avoid any coverage of the royal wedding I note the Clooneys and the bride (socialists all) have managed to encamp upon yUK and now occupy exalted positions. Perhaps brits should be demanding "build that wall"

MacDonnell's comments today about Venezuela are par for the course with 100% predictability: they're in trouble because (a) Chavez is no longer in charge, and (b) they're not doing Socialism properly. Truly, to be any sort of Marxist requires a mind-bending degree of self delusion. Plus, in the case of JD, breathtaking stupidity. And people still want to see this dangerous buffoon in government? Extraordinary.

Where did you see that ? All I saw was that he had left hospital. That doesn't mean he is fully recovered.

The same applies to his daughter.

As Douglas Murray posited some time ago, The Left somehow get a free pass because after the Soviet Union fell there were no trials for the guilty as there had been for the Nazi leaders at Nuremberg. Had there been, more people would have been aware of the murderous regime that killed so many it managed to make the Nazi's efforts look puny in comparison. Extremism of whatever flavour always ends with the picture above. It's guaranteed. Little Owen Jones would rationalise anything to cement socialist power right up to the point where it is he kneeling with a pistol pressing against the back of his head.

If I were to apply lefty rules, I would be forced to say that yours is a racist statement. Nevertheless, there is a virtuousness about the Americans when it comes to stuff like free speech and the upholding of the constitution despite all their other faults which are many are varied. If America is soooo bad jack, why do so many people try to get there ??

As for Meghan Markle, she should keep her gob well and truly shut, or else the standing of the Monarchy will fall. I don't care what her private thoughts are - but she should keep them to herself. As is so often the case with these 'effing champagne socialists, its the preachy shit that doesn't affect them that grips my shit. Will she be inviting economic migrants, sorry "refugees" to stay with her and Harry? Yeah, right, Oh look a squadron of pigs lining up on the runway. As for empowerment of women has she not noticed that both the Queen and PM are females. Tell me, what can I do that she can't?
My definition of socialism is never having to live with the consequences of the polices you implement.

For a perfect example of how utterly nasty the Left are - I recommend to you watching the recent Munk debate - https://www.youtube.com/watch?v=GxYimeaoea0

Venezuela has never been Socialist.

We have always been at war with Eurasia.

The comment I left on Guido a day ago seems appropriate:

When Communists use the word "socialist" they mean Marxist-Leninist. This teaching is supposed to lead to a happy society with neither private nor state capitalism, no employment and no money.

A great many people have to be murdered to bring this about. So far, all attempts have got stuck at the State Capitalism stage. McDonnell is quite right to say that, in his sense of the word, there have been no socialist societies.

However, in Britain most people think of "socialism" as the outcome of the work of Robert Owen and the Chartists -- universal suffrage, old age pensions, free schooling, NHS, etc. Quite a different thing.

(provided viewers realise it's based on fact)

Would anyone like to invest in my new company, making guillotines? It should be up & running (downwards, fast), ready before our saviour Corbyn is installed in No. 10. There's the usual model and an Islamic one on a swivel base, so the heads all roll towards Mecca.