Brexit on the brink

The most optimistic rumours about the ERG's efforts to defenestrate May is that the plotters have 46 of the required 48 signatures. The bad news is that consensus is that she will win the vote of confidence and we'll be stuck with her for the next year. The better news is that her actions to get Brexit through the next stage may destroy her.

The DUP have become semi-coalition partners. With only half of their £1bn so far secured, they're keen to maintain just enough ambiguity over their status to get the balance. What's not in doubt is that they won't support the government on a Commons vote on May's renegade deal. Neither will some 52 Conservative MPs who have so far signed up to a 'save Brexit' declaration.

Mrs May has sent her troops off with threats. James Cleverly, a new boy, is proving a star anilinguist, thrusting himself across social media proclaiming how entranced and supportive are anyone he meets of the Robbins Plan, how perspicacious and how gifted is our wonderful Prime Minister. He's not so much laying it on with a trowel as pressure blasting it from a five-tonne silo. The threats that May is making seem to come down to three -


1. If Parliament doesn't pass her treaty, she'll cause markets to be rigged to trigger spectacular falls in Sterling and share prices, to teach us a lesson

2. She'll make a deal with pro-EU labour MPs to use their votes to get it through

3. If everything else fails, she'll suspend the Brexit process until Parliament complies

If she does any of these, she may get the Robbins Treaty through, but she is finished. Not even my deeply flawed party could sustain her as Leader after this.

The vote is scheduled for next month, but many voices are urging her to bring it forward. She won't. She'll push every single resource, every dag, arselicker, placeman and everyone and everything that can be bought, bribed, blackmailed or commanded into an intense campaign to rubbish our NO DEAL position, so be ready. 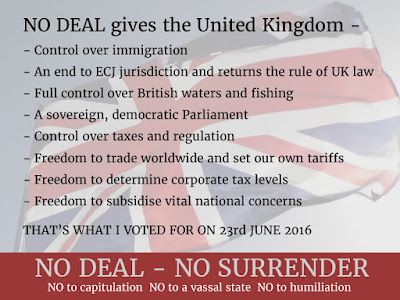 And how do "we" fight back Raedwald. I spent years as a UKIP activist and then a Leave Campaign (all of them!) activist. If the Leave Campaign hadn't shut up shop the minute the Referendum result was announced, I'd STILL be out there campaigning.

I've emailed and written to my MP - Oliver Letwin - several times and the tosser just writes back saying Treason May's deal is a good one and he supports the Prime Minister. I'm all over social media. What else are we supposed to do?

It doesn't matter if "she's finished" AFTER she's got her surrender document through Parliament. Your Party made her Leader; your Party is keeping her there; your Party has to stop her.

Do the cowardly Tory MPs really not understand the electoral tsunami that is heading their way if they don't?

Arguably this is how ordinary politics works, but is usually hidden from sight.

Because Brexit is far more important than the usual stuff the political manoeuvring is more obvious and more cutthroat. Plus the nature of That Woman is that she won't change her mind *in public*.

What can we do? Not a lot in the short term. Just contribute to the online discussions and keep things out in the open.

But do form a steely resolve to punish politicians and/or parties that would deprive us of our democratic choice.

I sympathise with DeeDee99: my MP is (Dr) Sarah Wollaston, who first turned her coat to support Remain, and who now (as she confirmed to me a few days ago) supports what she is pleased to call a "People's Vote" - something I reminded her we already had, in 2016. It is a complete waste of time informing me of her views: she is as immovable as May, whom she supports.
There are moves afoot in this constituency to deselect Wollaston, of course: local Tories are incensed not only by her Brexit position but also by her ardent health-fascist views on the State dictating what we eat & drink. Which makes me smile yet again at Raedwald's reference to "my deeply flawed party": I admire in a way his finally joining the Tories, but although I've toyed with this idea myself, it would stick in my throat. They are such ghastly humbugs, such self-serving two-faced wretches, I could not bring myself to pay them a subscription - which I don't think would be productive in any case, since the PCP seems to disdain its membership utterly.

Correction: "informing her of my views" - apols.

It is ironic that the only thing that might stop May, whether she wins the 'meaningful' or not, from implementing her version of Brexit is, god help us, a 2nd referendum ("No deal? May deal? Remain?). I do not think the Tory party are going to save us, the MOOG having shot his bolt and now destined to end up as a junior minister with portfolio for some leper colony north of Cardiff before stepping down to spend more time with his family.

Radders - I agree with the sentiment but in practical terms, whose fighting? We're not.

There's no massive angry protest in whitehall overturning MPs cars and frightening the living shit out of them, no firebombs through Olly Robbins windows...

There just JRM's impeccably tailored tones explaining why his lot have failed even to manage a vote of no f@cking confidence?

They are not scared of us and they are right not to be.

We're most put out and spluttering into our marmalade.

The french have many faults, but at least they manage to man the barricades from time to time, to dump horseshit around the place. Mind you even that never works.

I would like to see some broken glass and burning cars.

I'd like to see water cannon, molotovs and helicopters.

We're being far too sodding genteel and we're gonna get well and truly reamed as a result.

Why do you vote for these cunts?

Can I suggest - "no deal" is a negative. Call it something positive. Freedom Deal. WTO Deal. Real Brexit Deal. Any damn thing.

"c" is right about the passive, supine Brits - and right about the more volatile French. Years ago I recall the fishermen/shellfish farmers in Herault (spend a lot of time in those parts) being incensed at something or other which didn't suit them: they stormed the local offices of the Min of Ag & Fish, sacked the place, chucked the filing cabinets out of the windows, then set fire to it...
Agree also with Monsieur Weetabix: why indeed does anyone vote for these, er, cons?

If the governing politicians and the state machinery will not abide by a democratic vote then why should the public obey any other democratically passed law.

It's true that the "more volatile" French take to the streets rather more than us supine brits but it generally seems to be interest groups fighting for special interests at the expense of everybody else.

As a nation I submit they have been rather more comprehensively reamed than we, after all they are in the Euro. Also the belief that the EU is going to be some sort of greater France doesn't help.

Whatever the outcome of May's politicking (which is what this actually is) what we are seeing is perhaps the biggest and most blatant fuck you to the people of this country since the enclosures acts.

The more I see of the EU, the more apparent it's degeneration and decay becomes. Are these people so blind that they can't see what they are trying to whore this country to?

As many (including me) have been saying for years, the problem is that bunch of fake conservatives called the Conservative Party.

If Brexit is overturned there will be mass protests, do't worry about that.

For once Ketch is right.

And as for that waste of space Boris, well the phrase "all mouth and no trousers" might have been invented for him.

Having now read a bit more of the DWA I understand its layout and purposes better. The Draft Withdrawal Agreement is not a trade treaty. The DWA accomplishes three things:
1. Tidying up loose ends - a technical exercise consequent upon a change of management;
2. Establishing rules for the "implementation period" (previously called the transition);
3. Setting up rules, implications and hints for the post-transition period.

The DWA itself is divided up into the following hierarchy: Part - Title - Chapter - Articles (1 to 185); and in later sections: Protocol - Annex - Part - Article (where Article numbers start afresh at each Annex). Thus you have to be careful when you quote an Article number to reference it to its relevant Part or Protocol/Annex.

Never mind the DWA's malign intent to lock us into the EU's clutches, the DWA is turgid, abstruse, and badly constructed. It has all the signs of being done in a rush. It also gives me the impression that much of it has been written by EU bureaucrats, not our own civil servants. It is simply not good law.

the DWA is turgid, abstruse, and badly constructed. It has all the signs of being done in a rush. It also gives me the impression that much of it has been written by EU bureaucrats, not our own civil servants. It is simply not good law. -Budgie

and in that it differs from every other EU 'treaty'/wall of paper ever how?

Mongoose is right - we should call it WTO deal or better still, Brexit deal or Freedom Deal. Freedom Deal seems preferable to me. We should call May's effort 'The Surrender'. After all, day after day, from MSM, MPs, civil servants we get 'falling over a cliff', 'crashing out' when I suspect that when it happens most of us would hardly notice. Let's use these more favourably descriptive words about the Freedom Deal and inflammatory words about The Surrender, or even 'May's Surrender'. How about 'May the Destroyer' - she's destroyed her own credibility, she's well on her way to destroying the Tory party and she has the UK in her sights. She needs to be stopped before she does more damage.

'Clean Brexit' appeals to me. It seems desperate stuff that we now hope that other EU countries will kill 'the deal' because of their self interest.

Jack Ketch, It does not differ. And that's my point here. EU treaties are for EU members, and so (inevitably) written by the EU. The DWA is for a (supposedly) independent UK. Yet it seems to consist of EU instructions written by EU bureaucrats telling us what they will allow us to do.

Apparently our glorious leader and GROFAZ of the negotiating table has been given 24 hours to sell out the Gibraltarians (who have all my sympathy) and the whingers of the UK Fishing (who don't) and is to report back to Brussels on Saturday evening. Its gonna be a good deal, a great deal...so great!

Ketch is never right about anything. Since you are into banning folk these days Radders I suggest you ban him. We are now in a war and we need to stop playing by nicey rules and start kicking the shite out of our enemies.

It took Rome 400 years to fall.
The traitors of the uk have taken 40 years to do the same.
Nobody has been taught history in the uk for that amount of time.
Coincidence!!!!
Do the commission of the eu think they are prince's annointed by god? If so, it ain't going to end well.