Gibraltar was only ever part of Spain for 212 years

Spanish governments are always out of favour with their voters. With a quarter of the nation's young people out of work due to the disastrous economic management of the EU, raising spurious claims over the sovereignty of Gibraltar has been a perennial favourite, usually combined with some rather jejune and silly naval provocations. Brexit has brought it out again, with a puerile Spanish addendum to post-Brexit travel arrangements.

However, the British Overseas Territory, which has been under British sovereign protection now for 306 years and has voted twice to reject Spanish claims, was only ever a part of the Spanish realm for 212 years - the shortest epoch of sovereignty in the Rock's history. Following the fall of the Western Empire, Gibraltar has experienced the sovereignty of

The Rock has its own unique ethnic mix, language and customs. Under international principles of self-determination, the people of Gibraltar are very clear, and have asserted their wishes democratically with overwhelming clarity, that they wish to remain under the Union flag. 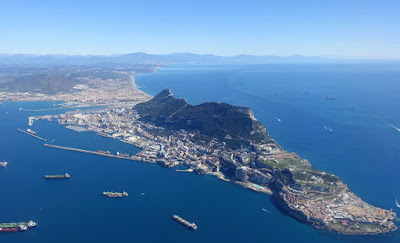 We should have kept HMS Vanguard (“What ship?” - “What Rock?”) permanently moored and fully manned off Europa Point.

It must be very annoying to have a huge landmark looming over the horizon, to constantly remind you of what you have lost. Funnily enough it is exactly the same in Armenia. The Armenians regard Mount Ararat as their mountain, a stylised picture of it used to be the logo of the state airline, it might still be so I have not flown used it for over ten years. Mount Ararat is now on Turkish territory, clearly visible from the capital city, Yerevan. It is a constant thorn in the Armenians’ side, made worse by their close personal relationship with the Turks.

This really applies to any number of situations and ultimately is no more than a childish support for globalism.

The Iberian peninsular consists of several separate nations of which Gibraltar is but one.

As is Africa, which in the northern nation of Morocco, contains two little colonies that are claimed by Spain, and let us not forget the "Canaries"... Who do they really belong to?

Take the argument that a given land mass should be under one government and you only come up with one solution...

The favourite of Star Trekkies everywhere...

The globalist "prime directive", that all of humanity is of one mind.


It should always be down to the majority voting permanent residents how and by whom they wish to be 'ruled' under (in terms of laws, currencies etc). Politicians can demand what they want but, as ever, the people are (or should be) sovereign.

Any politician (or party) that makes claims to territory are only looking to divert attention from their failings.

Sturgeon does so constantly and we all know how inefficient her party is in normal day-to-day running of affairs hence the constant bleating about independence despite the voters turning the idea down. The Spanish should resolve their Catalan issue before using Gibraltar to stoke tensions.

Dunno, about what, some people are in such a froth.

This was only a pragmatic bit of sleight-of-hand by the EU, to enable Gibraltarians, who work in Spain and vice-versa, to carry on life as normal in the event of a no-deal.

Some people are offended by the paperwork necessary to enable that canny stroke.

It's pretty mild, compared with the crap that has been levelled at the EU by, amongst others, our genius then Head Of Diplomacy no less, Bo-Zo.

The fine people of Gibraltar voted almost to a man and woman to remain in the EU. I think that they are probably going to be rather more forgiving than the usual mouth-foamers in England.

Anon, are there no mouth foamers in Scotland, Wales or Ulster? There are those there that voted leave. You do know this?

There was a certain General Galtieri who tried a similar tactic with The Falkland Islands to divert attention from his screwing up Argentina. How did that work out for him? Mind you, Britain had a proper leader then.

Yes, Ted. It was a member of the EC too then, and the other members were in principle obliged to support it.

The UK has just carried out a de facto hostile act against the EU, by deciding to secede. The position could not be more different. There won't be military conflict over this, because the rest of the world is already splitting its sides over the complete Horlicks that this country is making of everything, and further punishment is not needed.

If I were a cynic I'd think that calling Gibraltar a 'colony' was merely preparing the way for it to be used in the 'deal' negotiations after we leave the EU.

Perhaps we should be referring (negotiating tongue-in-cheek) to certain parts of modern France as 'stolen' from the English Kings? Or perhaps the modern day Italians could lay claim to the boundaries of the old Roman Empire? Which shows the absurdity of the whole 'historical' debate.

'Secede' is an extraordinarily ill-informed word to use and says much about the way the EU sees itself.

Secession is a process of dis-association that results in the formation of a *new* State or entity. The UK is an existing State and cannot therefore 'secede' from anything.

The Federasts of course see themselves as a nascent empire and members of the union as Satrap states already, it seems. I'm sure this terminology will interest many of the remaining 27 member States ..

negotiating tongue-in-cheek) to certain parts of modern France as 'stolen' from the English Kings?

"The UK has just carried out a de facto hostile act against the EU, by deciding to secede. The position could not be more different. There won't be military conflict over this, because the rest of the world is already splitting its sides over the complete Horlicks that this country is making of everything, and further punishment is not needed."

Well that's a relief! I thought they were going to declare all my slaves free for a minute.

As ill-informed and ignorant as ever I see.

This is what El Pais reports:

"The 2.3-square-mile territory of Gibraltar was ceded to Britain in 1713 under the Treaty of Utrecht. But Spain believes only the city, castle, ports, defense stations and forts of Gibraltar were legally ceded to the UK. Since the isthmus and the adjacent waters were not included in the treaty, Spain considers them to be occupied, and refuses to recognize Britain’s jurisdiction, which has led to a number of disputes."

People seem to be hyperventilating rather pointlessly. The EU have only used the same form of words as the UN does, after all.

Did the good citizens of Gibraltar get the vote in the 2016 referendum?

I often see people compare Gibraltar to NI but it's not the same. While they are in the EU (grandfathered in through the EEC), they never signed up to the customs union, VAT union, Schengen, etc. There aren't the same problems as with the NI border and if Spain weren't making a fuss nobody would care.

@George Mainwaring They've been able to take part in EU votes since 2004, Spain opposes of course... They voted heavily to remain but it's not so simple since they were never really in to begin with (hence no vote before 2004).

You do realise, that there are criminals in Gibraltar, illegally ferrying migrants and drugs into Europe from Africa?

And that Spanish attempts to stop this are hampered by the disputed status of the waters?

They're not just coming in via Greece and Lampedusa.


Anon - replace the mention of 'Europe' and the 'various countries' with "insert continent/country of choice" and you'll find your statement to be a bit more accurate.

The Spanish are such hypocrites, as if we didn't know. Plazas de soberanía.

Raedwald, according to The Economist's analysis, Spain ranks tenth as a country in its Quality Of Life index.

"Spain ranks tenth as a country in its Quality Of Life index. "-Anon

Figures from 13 years ago, way before the Euro crisis and just as the Irish Tiger was pouring more frosties into his breakfast bowl.

And there's a lesson to be learnt when searching the internet.

But still, if it were so awful now, then why do so many people holiday or retire there?

Thanks again Jack. This one for mid 2018 has Spain just one level above the UK:

Anon...what has quality of life to do with this blog-post or comment thread? Who has said Spain is an awful place to live?

Did you not read Raedwald's essay, Span?

He seems to me to suggest, that as a distraction from domestic woes for the Spanish people, a dispute with the UK would come in handy.

My point is, that life is perhaps more woeful in the UK. And it seems to be the UK rather, which is squealing victimhood over nothing about this.

Apparently they have just been introduced in Germany...'Hanf' means 'hemp' btw.

There are only three things wrong with Spain:

2. The expats living there.


Apart from that it is a great place.