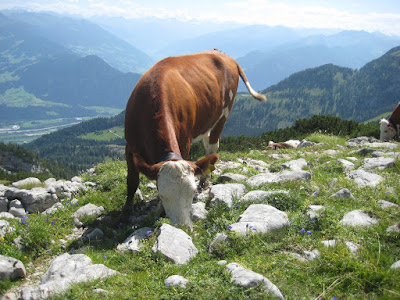 The Ol' Ways die hard 'round these 'ere parts, as do them politicians what trys and legislates them (translated out of the original German into BBC Mummerset)

It is amazing that the disease of meddling interference seems endemic in Europe. I imagine the Protestants will take the day off as usual, tell the boss they will make the half day up later and then do nothing about it. The Catholics have dented their reputation once again, any room for an Australian friend of the Pope to run a bank?

I am glad that you pointed out that that was "whimsy", Raedwald.

I think all these freebie relgious and public holidays should be banned across the globe.

On a geeky note; I'm not sure i would translate "tragfähig" with 'sustainable'. It really means something more kin to'capable of load bearing'.

We're spoiled. English has many times the number of words that German speakers have to get by with - and we have words in common use each of which has an absolute precise meaning - there's simply no direct German equivalent of 'penumbral' or 'desuetude'.

In fact, even writing the above para in German would take about double the number of words. Given the primitive barbarity of the language, it's astonishing what Goethe, Heine and Schiller managed to make of it. Hats off.

English is a creole language, so like others of that kind, it tends to be lexical rather than grammatical.

Your comment shows your ignorance and shallowness, Raedwald, if you ask me.

Frisby - I think you're a monster dickhead, too, and the best part of you ran down the inside of your mother's leg. Now behave.


Your comment shows your ignorance and shallowness, Raedwald, if you ask me.-Frisby

I think you missed the joke, 'penumbral' or 'desuetude' could not , to my mind, be described as in anyway in 'common usage'.As to Raed's supposed ignorance I suspect his German is rather better than he lets on- if it wasn't I wouldn't have bothered questioning his translation.

The oddest thing when I first met my future in laws was hearing them speak 3 languages in the same sentence. My own grandfather was reputed to speak about a dozen languages, my father spoke 3, but me . . . well I get by with English. What we all agreed was that Germany disgraced European civilisation. Only my grandfather spoke any German, and he was interned for that accomplishment in WW1.

Don't overestimate my ability - Ich spreche deutsch wie ein türkischer taxifahrer - and it still cracks me up when the local news reports that another chariot crashed, and the handlebar was drunk.

What I need now is some nice cloud cover - these brilliant blue skies at this altitude have buggered my plastering as it's going to get down to freezing in the unheated new kitchen tonight. It's either mong about on the web or read my side-by-side translation of Die Xenien with half the English page blank ..

Oh, thin-skinned, as well as shallow and ignorant, then.

Come on, translate that first para to make your point. I'll start you off.

(Twice as many characters I'll grant you, maybe.)

TWO abrasive ... german speakers ... this is going to be fun

No, I won't inflict my poor German on you. But you can help me.

English-speaking is termed anglophone and French-speaking francophone.
What is German-speaking? Genuine ask.


English-speaking is termed anglophone and French-speaking francophone.
What is German-speaking? Genuine ask.

OK seriously now, as far as I know a 'Germanophone'

Yes Jack. The French say "germanophone", so since the first two are borrowed from French neologisms, that will do for me too.

My German stinks, by the way.

Surely it is Deutsche Gramaphone?