Where is the gold?

We all know the terminally inept Gordon Brown, Britain's second worst post-war PM, sold off much of the nation's gold at a discount price for a short-term political gain (and no doubt Mr McDonnell will sell off the rest in short order if Labour take power). Britain's gold holdings are now somewhere on the low side, it appears. But are they? (The 395 tonnes sold by Brown would now be worth $13.1bn more - he really was a humungous dickhead) 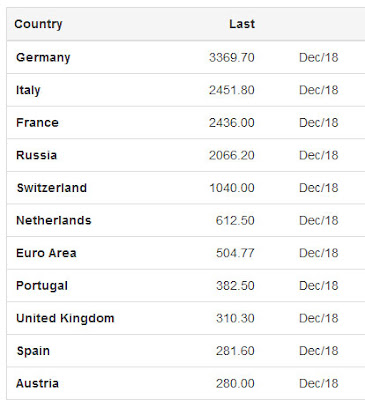 Our 310 tonnes remaining after Gordon's sell-off seem to leave us somewhere between Portugal and Austria, one of the smaller holdings. And Italy's precipice financial status seems a little less serious when you know she has almost two and a half thousand tonnes of gold squirrelled away - but all is not as it seems.

Zero Hedge reports on an unseemly squabble over who owns Italy's gold - the banks or the Italian State. As entertaining as this is, the more important point is that no-one has physically audited those gold bars since the 1970s. As ZH reports


The Banca d’Italia furthermore claims that 1199.4 tonnes of the gold (or roughly half), is stored in the Bank’s gold vaults under it’s Palazzo Koch headquarters building in Rome, with most of the other half stored in the vaults of the Federal Reserve Bank of New York (FRBNY), and a small balance kept the Bank of England in London, and in an account of the Bank for International Settlements (BIS) in the vaults of the Swiss National Bank (SNB) in Berne, Switzerland. But without any documentary evidence or independent auditing or verification of any of its gold, especially the foreign held gold, these claims are impossible to verify.

There are strong suggestions that Italy's actual gold may be somewhere on a par with the UK's holding - just a few hundred tonnes - the rest of it having been stolen, sold off, defrauded or evaporated. Some bright spark may have realised that what's important is how much gold the world believes you have, rather than how much you actually have.

Which really also leaves all the other claimed balances open to question, doesn't it?

Normally this would be a sort of anorak issue, but with dire warnings that should a catastrophic global financial collapse finish-off paper money we will need to return to the gold standard, perhaps it's something that should be checked?
at 06:29


You have to feel for those that hold 'gold certificates' as, seemingly, the actual gold versus the total held on paper is vastly different!

As they say, if you don't hold it you don't own it.

Given that the Chinese (and other eastern countries) have been buying and repatriating gold at furious rates and the FRBNY is already having difficulty handing over gold (to the likes of Germany for example) I would think that any attempt at auditing the 'supposed' gold stocks would be resisted - but for how long they can sidestep such demands remains to be seen. And every time they resist, the price will only leap higher.

Someone, at some time, will realise that they can 'force' the price of gold to ridiculous levels and they will start making these demands for audit - time will tell.

The next stage is total disbelief.

So, is the missing gold still in the ground, or is there someone somewhere with a white cat, swivel chair and secret hollowed out mountain?


Would it be possible for countries to institute their own digital currency backed by their GDP?

Gold is the 'final reserve' due to its rarity but in theory digital currencies are also limited in availability too. Backed by the GDP of a country, the value of such a currency could fluctuate with performance therefore offer trading abilities in a similar way to existing currencies albeit with built-in limitations and protections that are currently unavailable via fiat.

I'm thinking along the lines of a Government backed, interest-free digital currency that is in the hands of the workers to make increasingly valuable (or not). Taking the banks control away from money is the key to the worlds survival.

There's no way to distribute gold in small enough quantities to cover the existing debt in denominations that would be recognisable or handleable. A return to any form of fiat is simply to repeat the existing process of debt/slavery/exploitation (by the banks).

@Dave
Specific digital currency is limited
But any fool can and does start new ones every day.

R write, I really do hope there is a secret hollowed out Mt.

Well, Germany has managed to retrieve some of its gold from the US at least.

How much of it has been lost in short positions is anyone's guess, however."

But I must remind you yet again that this is not a repository for your unrelated spam links, which you seem to want to inflict like some sort of brutal punishment. Please take note.

Inflict? Where is the law which says that someone has to click on them? I did indicate its content.

Is that the same compulsion I wonder, which marched the Irish to the booths at gunpoint, and "forced" them to vote in favour of the Lisbon Treaty, Raed?

Are your readers all such wet lettuces then?

Raedwald, This particular Anon is a serial strawman invoker. Whether it's 51% voting to kill the other 49%, or hapless Irishmen forced at Garda gunpoint to vote for Lisbon, he is just silly and boring.

Budgie, stop squawking. A Straw Man involves one or more assertions that the original question or proposition was other that what it really was, whereas I'm expressly speculating.

But so did Jonathan Swift, and to useful ends.

How much money is in circulation? Well the Bank of England says 50billion in round terms.

So they are practicing a fraud, if everybody decided to take up the banks promise "To pay the bearer on demand...." in gold, you would receive little more than 20p for the GBP.

People are going to rush and say, yeah but the Bank holds other papernotes and sureties, that's true but would you accept a further piece of paper promising payment some time in the future from these charlatans?

Then there is a question of densities. Tungsten is alost exactly the same density as gold, and the Chinese latterly insist on gold bars being drilled into to determine if a portion of the gold bar they are buying is real gold, or cheap tungsten indistinguishable by density.

Given that this chicanery has been seen in the wild (actually, one African nation once discovered that the quarter-tonne or so of gold they had bought and were now trying to sell was in fact gilded mild steel) even a cursory physical audit isn't going to be enough.