Eurosnouts head for the trough

European Parliament election results are greeted here with a shrug and the familiar maxim "same trough different snouts". The low-level Eurosnouts can look forward to bloated untaxed salaries, expenses beyond the dreams of avarice for which they need to render no account, a corrupt EU that forces even the smallest companies under GDPR to onerous disclosure but absolutely refuses to itself reveal how Europe's taxpayers' cash has been squandered, misused, stolen, misappropriated, defrauded and peculated by the myriad snouts in the Brussels trough. They therefore have free rein to be as dirty, crooked and squalid as they wish, safe from the wrath of their electors.

This time around though the scramble for the EP trough is as nothing in comparison to the vicious in-fighting for a chance at the elite swill; several of the EU's unelected capos are up for rotation. On his way out is Juncker the Druncker, dismissed from his post in Luxembourg for tax fraud and whose appointment to Brussels possibly saved him from jail time. Those in the running for his replacement include Christine Lagarde, convicted in 2015 for her part in a $400m fraud but astonishingly not jailed by a corrupt French political establishment.

Various other Presidents and top jobs are up for replacement by unelected nomenklatura candidates and the field is filled with twitching bristly snouts all eager to bury themselves in the Euroswill.

We've written previously on the deep links between organised crime and EU funding HERE and on the involvement of EU funds / organised crime in the murder of journalists HERE. The Brussels trough is not a joke; the filth of the EU's corruption pollutes Europe and destroys lives. 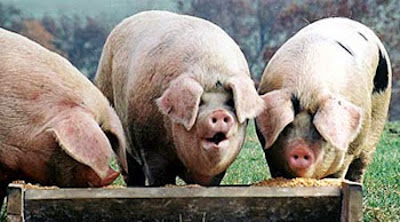 I believe some of them are even so squeaky clean and not worth prosecuting that the EU has passed an edict to say as much.

Of course Nigel is not one of those, because whilst a retired/scandalised Euro-Bigwig will automatically qualify, if you speak ill of the EU, they have a mechanism in place to withdraw pension payments.

The comparisons with the old USSR are uncannily similar.

The elected snouts are not the ones to watch, nor interestingly are the big wigs like Druncker, Draghi. Tusk, Lagarde or Schulz. The real power behind the throne lies in the hands of one man, who, one day will be EU President. Martin Selymayr. He's playing them, and none of them see it, or rather choose not to see it.

Nice photo of the pigs, though.

The EU Pigs are protected by the desire of the National Pigs to join their ranks.

So we are going to have to remove the Pigs from the taxpayer-funded teat in their own countries. First, the UK must get out and then we must assist any others who want to reclaim their independence.

Let's remember that the average EU pro-rata murder rate is just one-sixth of that in the US, shall we?

I guess you would not say that to their face.


"..the average EU pro-rata murder rate is just one-sixth of that in the US, shall we?"

WTF has that to do with anything? Except that the 'wrong' people are being killed?

Do you sanction the EU's process for leadership selection or not? Do you consider those either 'elected' to lead or candidates to lead are actually suitable for the job given their corruption?

Why would the UK want to be ruled by an elected 'Mafia'?

Let's remember that there has to be some point to trolling, shall we.

Must say, though, couldn't help but suppress a titter at Salvini activating a parallel currency. I'm sure the sheer moral force of the EU "parliament" (the league of non-nations) will stop such populist ownthought though.

Did you mean "aisles", Mark?

They've already done what you said.

I did, thank you for pointing this out

Raedwald, is there a second EU, about which you write? I don't seem to have heard of it.

The one here publishes all its expenditure, apparently:

It's just as well, since, if there were anything fishy, then the authorities of not one, but of twenty-eight countries would want to know all about it.

Edward - that's your last for the day.

I suggest you spend the rest of this Feiertag away with the fairies submerged in a fluffy pink fantasy world in which EU accounts can be audited and MEPs expenses are as open to scrutiny as are British parliamentary expenses - clearly you can't cope with reality.

When one looks at the political swill on offer, and those in place it really does get dperessing. TBP is asking for real people who have already made a difference to try their hand at being an MP...it will be interesting to see if the old adgae is correct (it is) about 'power corrupts' etc. still anyone would be better than the pompous self-entitled shower that we have. The EU of course is worse and many complete nobodies (their whole lives) and failures raking it in and continuaing to do so. Rememebr Baroness Ashton, more salary than Obama had, never had a proper job, a complete librarian (with no offenc emeant to librarians!)

The cricle-jerk gravy train on its never ending journey.

apologies for so many typos!

@SpanOws lots more coffee needed - or a lot less! You forgot to mention that after Ashton's 5 year tenure as an EU "High Representative" (yes, that's what they call them, I'd hate to meet a low one) she was paid another £400,000 of our hard-earned for doing bugger all. Additional to that she now draws a big fat index linked EU pension which is more then one and a half times our national average wage with little or no tax payable.No wonder the troughers want us to Remain to keep the revolving door open.