NB No comments that violate the Censorship Order please. 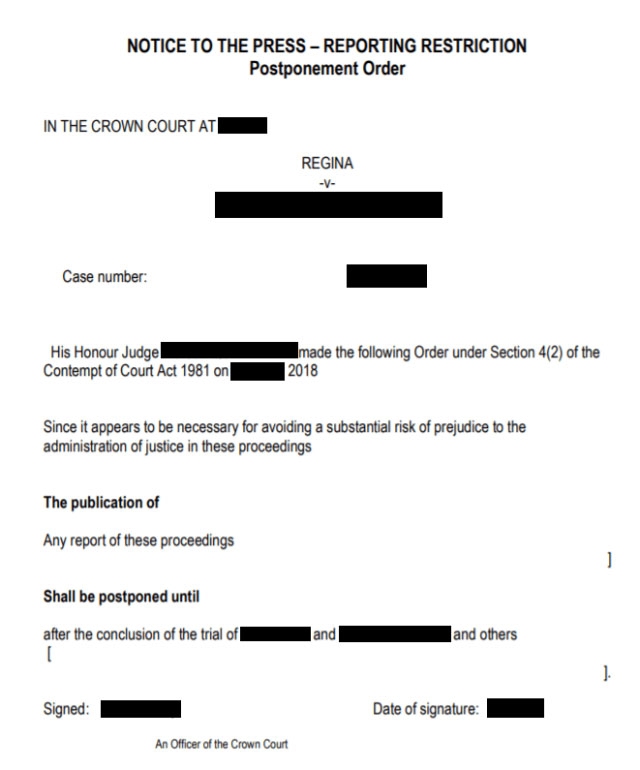 Update
======
GDPR gets its revenge. Blogger can be set to email all new comments automatically - but since yesterday, no comments. I have to check blogger manually. Of course, under GDPR I actually need to consent to receive emails from my own blog to my own email addy ... this one has slipped under Google's radar, but with fines of up to 4% of t/o for such breaches no wonder they've just turned ALL blogger comment notifications off until they come up with a fix.
at 07:17

Email ThisBlogThis!Share to TwitterShare to FacebookShare to Pinterest
Labels: censorship

I saw the video of the arrest before it was redacted. He was just doing his normal thing of talking (endlessly) to camera, and then at least six plods surrounded him, took his phone, stuck their hands in his pockets and searched him, and then bundled him into a tiny cubicle in a van.

Or the "black bag" from V for Vendetta.

Haven't heard much about this from Maajid Nawaz... I believe they are associated.

Don't you find rather odd that they choose to arbitrarily arrest [redacted] individual for [redacted] of a court case - just like Al Beeb etc do. Did you also notice that [redacted] was arrested and imprisoned on the same day.

Now if plod can act so quickly against [redacted] who was not breaking the law, then why can't they act as fast against the "grooming gangs" that were being arraigned in aforementioned court.

Did you see what I did there?

Grim, ain't it. I'd say we're in the last decade putting up with the political class - they're the same over most of Europe btw. Is it the sort of authoritarian behaviour we'd normally associate with either communism or fascism? This lady gives us a clue:

“[**] has been arrested in the UK for ‘breaching the peace’ while reporting on Islamic grooming gangs. This is what happens when a society doesn’t foster a culture of open debate and honesty. This is a stark warning for Australia not to continue down the same path."

"The alliance of big business and governments to restrict freedom of speech to control populations is the very essence of fascism."

"..it does look like overuse of excessive restriction in this case, probably based on his identity, i.e. bad law misapplied, to get an individual....The issue appears to be not so much about breach of the peace as about contempt of court and preventing prejudice to trials. That’s something the courts are hard on and probably should be, but from what I can tell so far the law on that looks excessive, and over applied in this case, to get someone they find troublesome."

I watched the video - the link I followed is https://www.facebook.com/thetommyrobinson/videos/1259990514137000/UzpfSTM4MTk3MTQ0MTkzODkxNjoxMjYwNjQ0MTMwNzM4MzA1/
It's deeply concerning. Are we in Kazakhstan, or somewhere? TR behaved with more restraint than I might have shown in the circumstances. How much media time has this received? Little so far as I can see. I've been meaning to buy his book for some time, and now I shall do so.
Useful opinion piece about the incident at Gatestone:
https://www.gatestoneinstitute.org/12375/in-the-european-appeasement-olympics-who-wins
The author is correct in suggesting it illustrates too well the craven appeasement of Islam shown by the UK Establishment, and the sensitivity of the police to any airing of their culpability in ignoring Muslims' abuse of young white girls for so long. It's scary.

We would all want a fair trial - if you were wrongly accused of something and outside your trial there was a person implying your guilt, then you probably wouldn't be happy.

[Redacted] is doing the right thing - he's just wandering over the line of what's legally acceptable. This might be through ignorance (thought I think he understands the implications of his suspended sentence) or that he thinks it'll gain more visibility.

Dangerous path to get sent down where he could be a victim of the RoPers in prison. I think there could be some real problems if he becomes a martyr - the > 175,000 signatures on the petition about this suggests a large unrepresented body of people who might just be tipped over the edge.

Matt - I sort of agree

1. Trials should be both fair and open to public view (except in the most extreme and rarest cases of national security)
2. We have a well-understood prohibition on not commenting, after a person is charged and before the jury returns a verdict, on anything other than factual details including evidence given or produced during the trial.
3. It is usually perfectly possible to arrest and charge a person breaching this rule with contempt of court; if indeed Robinson breached this rule, his arrest and charge are quite justified. Ill-considered, publicity seeking or coercive behaviour could imperil our getting guilty verdicts against guilty persons.

The issue is (and I think some folk have misunderstood the Censorship Order) the trial judge has ruled that the trial of these persons is to be held in secret and it is difficult indeed to understand why he should have made this order. This bans even the reporting of evidence as it is given in court - something that most people agree motivates other victims of the same sort of crimes to come forward.

In the absence of any reason why the factual reporting of the trial may cause 'substantial risk of prejudice' the Censorship Order - and the judge - are on probation. If it subsequently proves to be for sound reasons of justice, fair enough. If it proves to have been made for reasons of political expediency, we must see this judge de-robed. However, I can imagine very few reasons that could justify this draconian prohibition of fair and open justice.


" if you were wrongly accused of something and outside your trial there was a person implying your guilt, then you probably wouldn't be happy."

Doesn't seem to bother the media - vis a vis rape/abuse allegations etc - ask Cliff Richards about it some time.....

When it comes to our non-reflective cousins abusing little girls...... no, any comment is strictly verboten. And I use the (bad) German for good reason.

But when it's against a WHITE person.....meh. Anything goes.

So, remind me once again, how DO those 'discrimination laws' work again?

Raedwald - the gagging order is over the top I agree. Judge looks to be the usual MC/CM arse but I doubt anything will be done about it. Looks at what happened to the commander in charge of slotting a Brazilian carpenter - didn't do her any harm.

Dave_G - that's my point - Cliff wasn't happy about it and the BBC will get rightly f*cked over by him. They probably thought he'd be another Jimmy, Rolf or Stuart but he's stuck to his guns on his innocence.

Not surprisingly, it was South Yorkshire police who were involved. The same force that were responsible for Hillsborough lies, the Rotherham f*ck up and this.

I should make it clearer - South Yorkshire involved in the Cliff case.

West Yorkshire at least got the RoPer kiddy fiddlers in Bradford, Dewsbury, Halifax and Huddersfield and erased the drug dealing tw*t on the M62 slip road.

The judge is probably a kiddie fiddler, TAXI

I use the (bad) GermanDave_G

Nope, the German is fine.

It's not just, it's just wrong.

But we live in a society ruled over through and by nan authority which chooses to side with the foe, yes to protect the unclean and with means using the full force of the law.

There is no right in Britain and we have no rights because the politicians, the media and conspirators in the clamp down, the PTB are putting up the barb wire as we speak, soon there will be a wall errected and no escape.

I feel it incumbent on me to report the true facts of this case. Out of sight of the cameras, x was brandishing an Uzi submachine gun, ready to murder any innocent Moslem passerby. He is head of a group which has a long and appalling history of abducting innocent Moslems and decapitating them with rusty bread knives. In addition, they have abducted small Moslem children to have their wicked ways with.

Of course, the police, as yet, have no evidence of this, but you can be sure that they know the truth of the matter.

The man is a clear and present danger to the public.

N. B. Some facts in the above report have been changed, in the style of The Guardian, to present the truth as it should be.

When Rolf Harris, Stuart Hall, Max Clifford etc. were tried for sex offences, the Courts & CPS encouraged maximum publicity for the trial "to encourage other victims to come forward".

Piss on all their bollocks about Contempt of Court. The first load of shite they codged up to jail him was "mortgage fraud".

Ever heard the name Mandelson? Contrast the two.

Looking like the petition will go over 500,000 signatures. Looks to me like there are a substantial number of people looking for a political party that addresses the concerns that [Redacted] highlights.

Some form of (small c) conservative working class party would sweep up votes in large parts of the country. And by conservative, I mean something a lot more right of centre than the shower of crap that is the Tory party.

So the reporting restrictions have been lifted and the chattering classes are all tut-tutting about how Tommy broke the law.

As I said in my earlier post, he was reporting under restrictions and that's what got him into trouble.

Problem is that a lot of people don't care - they hear him standing up against TPTB with issues that affect them and they love it. The genie is out of the bottle and people love it.

All Tommy needs is a few candidates standing in some Northern shiteholes and he could have more MPs that the LimpDems.

he was reporting under restrictions

I caught the headlines on this on Radio4 this afternoon, and as far as I understood it the trial Tommy was 'reporting' on was already under a reporting ban? If that is the case then that would be worrying- not about Tommy- but why a 'muslim rape' trial would need to be sub rosa.....
or was it Tommy's presence outside the court that got the defence lawyers (pray god not the prosecution lawyers, surely?) to apply to keep things stumm?