I cannot express too warmly my admiration for the Chief Minister of Gibraltar, Fabian Picardo's reaction to May's docile surrender to the hysterical Spaniards. The Spanish government, with an election in the offing, resorted to crude overwrought rabble-rousing, demanding rights over Gibraltar. May of course was happy to give way to them; after all, having surrendered Northern Ireland to the EU, giving Gibraltar away would be peanuts. Luckily, the Withdrawal Agreement was 'locked', so no legally binding changes could be made. She changed instead the waffle-document, 26 pages of supine abasement by the United Kingdom to the EU.

The reaction of the Gibraltarians could have been angry, disappointed, frustrated, or filled with bitter recrimination against May's signal incompetence. It was none of these. It is instead a reminder of the dignity and magnitude of the Rock; geographically it is small, but in the grace and decency of her official response, she towers above the moral pygmies of the EU. God bless you, Gibraltar. 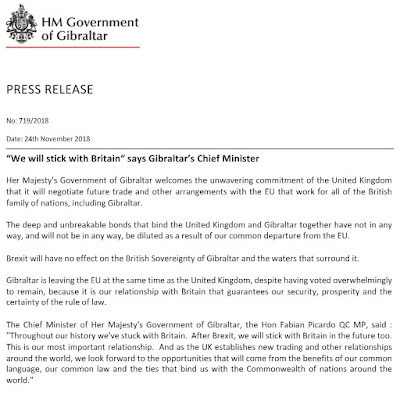 The Spanish intervention this week was a Mrs. May/EU trick to make the UK voters believe that the Spanish attempt to take over Gibralter had been seen off.

The Spanish knew they had no chance of success with the Withdrawal Agreement as this is passed using QMV.

They know their real power will come when the UK attempts to leave the backstop arrangement, the arrangement where we follow all EU directives, rules, regulations but without representation.

This time unanimity is required and every EU nation will be ensuring they get everything they want from the UK before agreeing to allow the UK to leave, such as membership of the CU, FoM, unlimited access to our fishing grounds, "regulatory alignment" (SM), EU budget contributions etc, etc..

This is when Spain will either get what it wants over Gibralter or the UK never leaves the backstop arrangement.

The statement “Her Majesty’s Government of Gibralter welcomes the unwavering commitment of the United Kingdom that it will negotiate future trade and other arrangements with the EU that work for all the British family of nations, including Gibralter” means :

“The whole of the UK will have to accept the trading conditions and other arrangements that are acceptable to Spain for Gibralter”.

So that's Arlene Foster and now Fabian Picardo standing up for the indivisibility of the UK, whilst our own treacherous Prime Minister is only too willing to bow the knee to Brussels and break it up.

When is Parliament going to get rid of this most duplicitous, mendacious and treacherous Prime Minister?

I too commend those Gibraltarians - though I don't recall there being much "dignity" there, a pretty squalid and scruffy place.
Pit you shut down commenting on the "pig/lipstick" thread RW: I see your amusing sidebar satire about The Guardian's "comments" section is still there...

Excellent, copied and hat-tipped. Gib has released a further fuller statement after a telephone chat with Treason May, https://www.gibraltar.gov.gi/new/sites/default/files/press/2018/Press%20Releases/720-2018.pdf

She made repeated assurances...we've heard that before...

It is difficult to comprehend the extent of Theresa May's treason. It is just as difficult to understand how the majority of Tory MPs can keep supporting her. Don't they see what's coming?

As for Gibraltar, Northern Ireland, or indeed England, the United nations principle of self-determination applies. Just as Egyptians should run Egypt, so the British are entitled to run their own nation. Not the EU, nor anyone else.

The British government and bureaucracy do not deserve this kind of loyalty.

Indeed, it hasn't deserved this kind of loyalty since it passed the European Communities Act in 1972.

The Tory Party has been riven with traitors since Anthony Eden, if not before.

If maybot had any children, perish the thought, then, she'd sell them to a barbary corsair, for the sake of keepin' it together 'le grand projet'

oh yeah - SAVE THE MONKEY's.

While one has to admire the clarity of Gibraltars statement, (rare in these days of obfuscation) I cannot understand how anybody believes that Ms DisMay has "caved" to the EU.

The agreement is a clear statement that yUK will negotiate directly with Spain to resolve whatever issues they believe are triggered by BRINO, this instead of negotiating with all 27 EU members. Despite my ambivalence of all things DisMay, I believe she has finally pulled of a significant concession from the EU. We should not allow yUK jingoism to cloud the issues.

And for removal of all doubt, I still believe DisMays BRINO is a disaster, which richly deserves to be garbaged.

A genuine request for help. I have long been passively old school liberal /Hayek thinking but have not been active in politics. Now I think I need to try to “Do My Bit”
Here I am in a South Wales valley town, Labour majority well north of 20,000.
Should I join Conservatives, UKIP or something else?
seeker

seekerofthetruth, short of moving home you have almost no options. labour are not going to lose any time soon no matter how bad they get. The best is to (a) make sure the incumbent MP does his/her best for the constituency (b) lobby them to honour Brexit (c) probably join UKIP and get door-to-door-ing

It is notable that the Draft Withdrawal Agreement (DWA - 585 pages) came without a summary or even an index: the establishment don't want you to know what's in it. In theory the DWA will be followed by a negotiated "Relationship" treaty. But the EU has no incentive to give us anything better than the DWA. So in essence what you see in the DWA is what we'll get in the final treaty. And what is in the DWA is in essence Chequers.

What I see in the DWA is in essence the same as our current status but without even the figleaf of influence we currently "enjoy". And without a means of escape. We will pay and obey in perpetuity. I could not possibly support a party that has brought us to this pass.