Are mandarins plotting a coup to put Puppet Stewart in Number 10?

Sedwill has broken cover to reassure the public directly that he is cuddly and harmless - which worries me greatly. This is not a proper thing for the Cabinet Secretary to do at any time - but bang in the middle of a Conservative leadership election, it is downright suspicious.

And now even the Telegraph is pushing weird no-hoper Stewart as a potential PM - but the latest meretricious column, by Bryony Gordon, is heavily censored with all comments forbidden. They know how their readers will respond.

The Deep State may not be willing to accept the nation's democratic processes. The son of a senior spook, no matter how disturbed, who can be manipulated and the leadership election sabotaged to put him in power as a puppet of the grey men sounds absurd, tinfoil hat stuff, but these are incredible times.

Not one non-establishment online opinion favours Stewart - but he's come out of nowhere and is being bigged-up by the establishment media. Not one Leaver MP is backing him. He shouldn't even be in this contest. Something is going on, and it smells as rotten as week old mackerel. 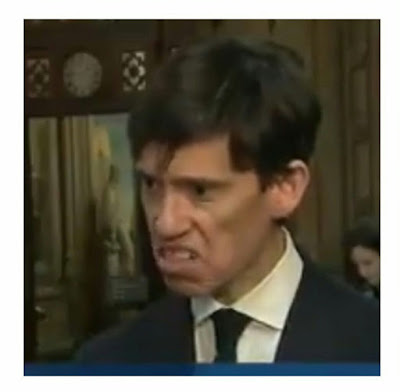 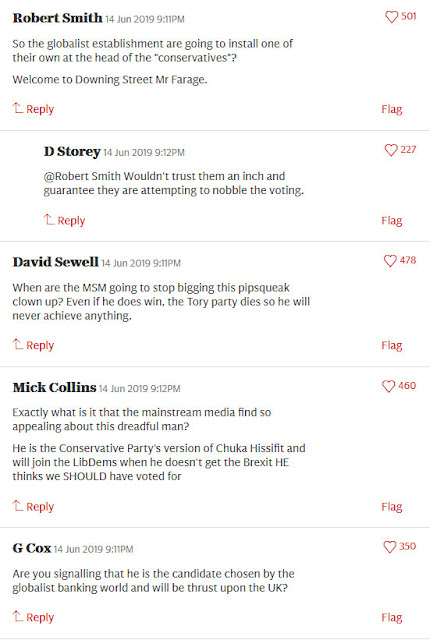 The same as with the French tart, Mr Macron. Suddenly appeared on the world stage and behold he becomes President of France.

And just as with Mr Macron, Mr Stewart appears to be of an unstable temperament.

Indeed Raedwald, as per my comment a couple of days ago, clearly and Establishment palnt. With the BBC and Sky push, that can be only the only explanation. Plus he's ex Labour of course. Continuity Blair.

The president of France has come from 11 different parties since they stopped being Vichy France.
Macron is nothing special there

And you whinge about the EU being "undemocratic".

What a woolly scarf eh, me ol' chinas?

Rory Stewart is, I think, the 'son of May'... and the Remainer establishment want him in place to have yet another go at getting something rather like the execrable WA through.

I can't see him being elected as Leader; or if everybody else fell over mysteriously I can't see him lasting long before an early General Election is called.

4 months ago, no-one who didn't follow politics closely had heard of Rory Stewart. Then a senior member of Cabinet was sacked on trumped-up charges and Stewart was suddenly parachuted into Cabinet shortly before the PM was finally forced to resign.

No sooner in Cabinet then he was all over the media like a rash supporting Treason May's Surrender Treaty and no sooner had she announced her resignation Stewart was being talked-up as a potential successor with the media falling over itself to promote his candidacy.

None of these is a coincidence. The Remainer Establishment have decided that weird Rory is the man to deliver Bremain for them.

Anyone who has ever read Bryony Gordon's columns knows she only writes about female housewife/mummy trivia, weight, clothes, kids, boring light weight stuff. The thing that's supposed to make her edgy and interesting, but doesn't, is her addictive past. Who cares? Rory son of successful father has much to aspire to but fails miserably because he acts like precocious 12 year old who's continually praised and told how clever he his, so thinks he's Superman, he can save the world. Is he the best they can do? Odd that his CV is so impressive while he appears juvenile & flaky. I continue to think Hunt is the Establishment plant.

John in Cheshire. Macron was elected by the French people, some of whom now think that they may have voted unwisely, but at least they voted.

Our PM will be imposed upon us by the Tories' apparatchiks.

Even our sovereign Parliament will not have a say, and the Tory general membership will have an imposed shortlist, if they ever get to vote at all.

The European Union is a model of democracy by comparison, and it only makes law in uncontroversial areas to boot.

He's being bigged up right now as a guest on Nigel Farage's LBC show. Weird times!

If Nigel wants to wipe out the Conservative party, it would help him if the party was led by an idiot.

A dangerous tactic, though.

I surmise that Stewart is the decoy who will of course not win the Tory leadership but may take the attention off Hunt, who is, I suggest, the real FCO and civil service remainer choice.
When Stewart is voted out of the race, there will be general relief, and Hunt will not be scrutinised further. Hunt and Johnson reach the endgame, then Johnson is blackmailed into silently retiring from the fray.

It's astonishing how many of these putative 'leaders' think that instead of grasping the obvious facts and preparing the UK for a WTO exit with at least an attempt to put through Art. 24, they can re-negotiate the Merkel/ May Withdrawal Agreement with the EU before leaving. They've understood nothing. The WA is a dead parrot, but these little boys cannot stop themselves from asking Nanny if they can please have a story before bedtime.