Is it fair for this man to be in politics?

From time to time matters of real concern enter the robust and challenging world of politics. Today, having watched Rory Stewart's  performance and pronouncements I am more concerned than ever for the lad's mental heath. Those close to him should advise him to withdraw, rest and repair what can be repaired. It is simply not fair to allow a personality this vulnerable to be in politics. 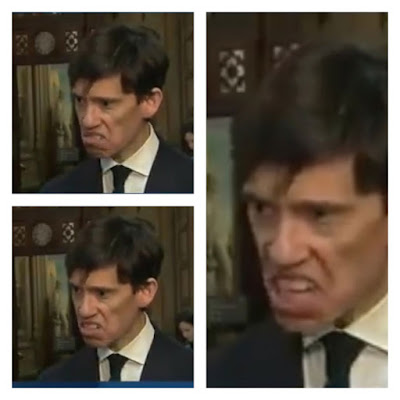 So far he has threatened a coup in the event of a no-deal Brexit, setting up his own vanity parliament somewhere near to the Palace of Westminster. Elsewhere he has made it clear he is an illiberal and authoritarian Statist. Stewart is quite simply wholly unsuited to democratic politics; he is a vain popinjay imbued with an immense sense of entitlement, a privileged scion of the patrician class, capable of displaying an alarming petulance when he doesn't get his own way.

Would you really want this disturbed little Nero anywhere near our nuclear codes?
at 05:44

We always seem to get some sort of diversionery nerd at this stage in Brit elections. Labour are the best people to do this with absurd names being put forward, closely followed by the Lib Dems, who everyone likes when (yawn), they haven't a cat in hell's chance of getting anywhere.

Boris has shrewdly kept out of most of the limelight up to now, the last in the ring etc. The pillock no-hopers sqeak and dribble a lot at this stage, and it's not much more than an end-of-the-pier show. I'm sorry about Andrea Leadsom though, she deserved much better.

Of course, the BBC will already being preparing for 'Nerdgate', with countless offers of sweeties and lots of Coke...

Raedwald,
I fear you are correct, he has gone from being a smart newcomer a few years ago to, apparently, deranged narcissist. And yet Mrs. May promoted him twice!

The PCP really does need a stiff broom to be applied..

Mrs May sees his as the son she never had. Ghastly, self entitled and over privelidged little man. Gollum in a suit looking for precious.

4 months ago, virtually no-one who didn't follow politics fairly closely had heard of Rory Stewart. Now, it appears, that a Cabinet Minister was sacked to make way for him and he's all over the media like a rash - being heavily pushed by the Remainer Establishment as "the alternative leader in waiting."

I can't see him getting anywhere near the final two and if he did, the membership will reject him. And so would the wider electorate.

He did rather more in Iraq and Afghanistan than anyone writing here, and worlds more than Boris Johnson has in his entire life.

Quite true Edward. No-one here screwed up a junior position in Southern Iraq to the extent that not once but twice the local population were incited to insurrection against the British, nor has anyone here needed rescuing when besieged by hostile Sadrist militia in Nasiriyah. His Iraq adventures may be judged a failure. Likewise Florence of Belgravia achieved nothing of any note in Afghanistan except meterial for an account dismissed by many as mendacious.

Yes, you are right, he did deal with Iraq and Afghanistan better than he has been credited with and yes, he is intelligent; but that does not necessarily entitle him to be competent for the top job. That said (as a lifelong conservative) none of them inspire me.


"Cometh the hour, cometh the man". Well the hour is upon us, so where is the man? He'd better hurry up!

A read of his Wikipedia entry is interesting. He reminds me of many 'adventurous' military types who do achieve good things through their one-eyed determination - until they extend themselves too far a spectacularly fail (often on a heap of their own dead).

Someone elsewhere said that he reminded them of Orde Wingate (another interesting Wikipedia article). Me? I think Custer might be a more appropriate figure. Undoubtedly brave, but foolish, a promoter of chaos, and ultimately a failure.

Thanks for the lack of warning before the pics. There went my breakfast!

Stewart seems to aspire to be a real life King Lear...

Lear: I will have such revenges on you both, That all the world shall—I will do such things— What they are, yet I know not, but they shall be. The terrors of the earth!

Erm, I think the fact of being invaded was what stirred up insurrection, Raedwald. You know, like it did in Vietnam, France, etc.?

The fact that the English didn't do so well against the Normans is no model for others.

The CONservative party leadership election is like white noise.

Superficially chaotic and hard to listen to.

But deep down, nothing is changing.

And he was never a real infantry officer either - he did a work-experience gap year commission thing - 8 weeks at Sandhurst then a few months playing soldier with a single tit on his shoulder. What the Septics call a 'shake and bake' commission - which in no way qualified him as a regular army 2 Lt.

Cheerful Edward has obviously never heard of Hereward the Wake.

Rory Stewart looks like a cloning attempt on Willem Dafoe that’s gone horribly wrong. But they do say politics is showbiz for ugly people. An ugly face with an ugly personality isn’t a winning combination with the general public, even if he’s wildly popular with Grauniad readers.

So The Wake succeeded in re-establishing Saxon rule, did he?

There's me thinking not.

But yes, get Bo Zo in. It will be the end of the Tories for a generation or more.

And he kept talking yesterday on the telly about what his mum would say. Very odd individual.

@Cheerful Edward: the point is they resisted for decades. Much longer than the Iraq example.

The Iraqis didn't need to resist for decades.

They won, basically. They have Iraqi rule, of a kind.

He makes Boris look good, and that takes some doing. Maybe they're they're working as a team.


Cheesy--it seems there is no scum you won't crawl to in order to do this country down and insult us.I say us because you are no part of this nation and should be expelled to your EU pals mercies.

Stewart is a phony--claims to have been an Army officer after doing a 5 month "commission" during his fucking gap year--and a (horse-faced) remainiac traitor like so many other Tory trash MPs and you Cheesy.

And had the Yanks employed the kind of brutal measures --techno-enhanced of course--that the Normans did perhaps then we'd see what Afghans/Iraqis are capable of.

"even if he’s wildly popular with Grauniad readers"

Not that they'd ever vote for him, naturally........he'd just be a useful idiot, doing their work, even if they happen to lose an election. Its always good to make sure your enemy's leader is well disposed to your own interests. Better that than someone diametrically opposed of course.

@Raedwald: "Elsewhere he has made it clear he is an illiberal and authoritarian Statist."

This is exactly why he being promoted on some scale by Sky, BBC et al. He is a non-entity that agrees with the establishment and they like that. He is also Labour/Lib Dem and rather stupid.

"He did rather more in Iraq and Afghanistan than anyone writing here, and worlds more than Boris Johnson has in his entire life.

Wrong on every count. Stop beleiving the ridiculous hype. The BBC slavering over him is as embarrassing as his own self-love.

Such a shame, I thought he was really good in those latest "Magnificent Beasts" J K Rowling films.

He just seems to be overacting now...

"He did rather more in Iraq and Afghanistan than anyone writing here,"

Odd, the Left rarely big up military service in anyone else, indeed they would usually regard it as a very black mark against a candidate.

Double standards, without them the Left would have no standards at all............

He's another ex-Eton Tory boy, with an evident sense of entitlement to rule, like Johnson. Bar the particular pubic school, like Farbage too for that matter.

Ed, he is one of the weak chinless wonders they churn out in between others of excellence.

Sobers, yes, same here as in the USA. McCain was a hawk's hawk but the Left love him because he hated Trump. McCain in fact wasn't the hero way back when although he did survive POW etc. And even more recently did a lot against his country's interests, almost like he was doing it on purpose to trip up Trump but that's another story and he's dead anyway.

" McCain was a hawk's hawk but the Left love him because he hated Trump."

But of course when he was running against Obama then he was the devil incarnate. The ultimate irony is that if Rory Stewart did end up the leader the of Tory party, he very same people currently bigging him up as 'the acceptable face of the Tory Party' would immediately be calling him every name under the sun.

The Right never seem to learn, the Left are going to call the leader of the Tory party fascist, racist, sexist, Tory Scum, worse than Hitler etc etc regardless of whether they march down Whitehall in a snappy black uniform singing the Horst Wessel song, or are a mild mannered accountant who is kind to animals, donates to Oxfam, attends the CoE, and takes care of his aged mother. So you might as well elect a proper Right wing Tory leader as some milksop like Rory Stewart, because they'll both get the same abuse once elected, regardless of how much 'love' the RS character gets beforehand.

Like the Dane, the Left can never be appeased.