It's the 19th Century again

I've drawn parallels here before between the political convulsions the developed world is undergoing and similar convulsions in the mid decades of the 19th century I do so with a degree of confidence that, just as we avoided 1848 in the UK, we will do so again. Serfdom didn't end in Austria until 1864 - around 350 years later than England - and its traces linger discernibly in the sparse alpine area in which I live. That's another post. This is about imprisonment.

There came a point in the 18th century when we cut down quite noticeably the number of people that were hanged for trivial offences. The idea of prisons hadn't really taken off, so at first we sent the minor offenders as convicts to America, but that nation's independence put an end to it from 1776. Then, between 1788 and 1868, we sent them to Australia instead. Or rather we didn't. The following is from Mayhew and Binney's Criminal Prisons of London (!.pdf)- available online and I recommend it to anyone interested in penal policy. 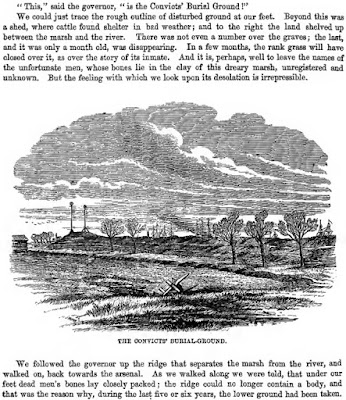 Not only was the river wall packed thick with the corpses of convicts but so too was the land within the Arsenal - they filled that first, before they ventured out onto the marshes. The first burial ground, later the site of the Armstrong Gun factory now converted to extremely expensive luxury flats, was packed so full of deliquescent convicts that the stench sickened the arms workers.

We sent 164,000 convicts to Australia. But between 1776 and 1868, for 92 years, somewhere between 500 and 1,000 a year died on the Woolwich hulks alone - so nationally I am quite sure that many more convicts died awaiting transportation than were ever delivered to Australia. Disease, starvation and overwork killed them just as certainly as the hemp rope, but left the public with a warm feeling of virtue.

Today we have as many people in prison as we had in the late 1970s. Our population now is somewhat greater, so one could argue that we have made some advance. But for 50 years, not much. 'Porridge' may have reflected life inside in the 1970s but does not do so now. Drugs, Islamism, violence, suicide, privatisation and the utter disdain of the Uber and Netflix generation (even the Guardian can't really be arsed) for the welfare of the prisoner have made our prisons as offensive as were the Hulks to reformist Victorians.

When the Inspector of Prisons has to instruct the Secretary of State for Justice to take action at a prison in which 10% of inmates are at risk of self-murder we have reached a low point. Gaulk may be more concerned at his imminent deselection for the betrayal of his party's election manifesto, but even he must now take action.

And we must all be concerned. And we must not forget our obligations in the Corporal Works of Mercy - to feed the hungry, to give drink to the thirsty, to clothe the naked, to give shelter to travellers, to visit the sick, to comfort the imprisoned, and to bury the dead.


I advocate 'sentence doubling' where for each conviction the accused must serve DOUBLE any prior sentence - with no restriction, limit or challenge.

This method of sentencing would serve to both punish and 'educate' the criminal to their ways with the prospect of ever more severe punishment regardless of the level of offense. Less harsh than the 'three strikes and you're out' method but with a well defined outcome for those that persist in offending.

Whilst we have a right of duty to support and assist those who start a life of criminality towards a more civilised outcome there remain some whose detention serve the public good regardless of any imposition on their own freedom. I suspect the public would have no concern for such criminals and not baulk at the cost of permanent incarceration for there really, truly is a case for 'no hope' despite the wailings of the 'good intention' brigade.

There are limits to everything - especially patience.

Agree there should be prison reform. Bullying and buggering by fellow inmates are not part of judicial sentencing. Also need education and mental health assessment / treatment.

And changes to Legal Aid so everyone gets a fair trial and the innocent don't get stuffed with legal fees. According to The Secret Barrister the cost would be a penny on a pint of beer.

Tell us more about Austrian serfs!

more civilized they scream it, the great and the good, multkult is good and moral relativism means there is no sin, unless you go against the received wisdom and then hell and all fury will be unleashed upon you.

Britain is, an open sewer and slave prison, where life is cheap and humanity has disappeared.

cultural Marxism, communism, socialism call it what you will, its basal instinct to reduce mankind to the level of the beasts, ask Stalin, ask Pol Pot, ask corbin man, ask junckyard and selmayr.

Instead of giving prisoners 50% off their sentence 'for good behaviour' as soon as the prison van rolls through the gates, why not use the old military system used in their detention centres? The prisoner starts off with the punishment for the offence by having no privileges whatsoever. No tv, no computer, no fluffy duvet with Star Wars images on it. No privileges. If more than one offence committed, sentences to run consecutively and not concurrently as at present. Then, once the prisoner begins to follow the rules, privileges are gradually introduced. Any reversion to disregarding the rules means having privileges removed. Once their behaviour reaches a certain level, the re-introduction to society process begins. I knew quite a few soldiers and chairman in my military days, who experienced military prisons and I never met one who would risk going back there.
One of the major problems in today's prisons is the forced organisation on non Muslims, assaults and beatings given to those who refuse. The answer is simple. Any Muslim sent to prison goes to a specific place (HMP Mecca has a nice ring to it). With no fraternisation, or conflict, with other religions, this particular problem should go away. Paedophiles and wife beaters could also be sent there as they would fit right in.
Just saying.

@ Dave_G "I advocate 'sentence doubling' where for each conviction the accused must serve DOUBLE any prior sentence - with no restriction, limit or challenge "

I have thought along similar lines but not for prison as I think it would just add to the overcrowding and cost. Prison for serious crime but for less serious the birch.
First offense 6 whacks.
Second offense six whacks, plus the first six obviously didn't work so you get those re-administered giving a total of twelve whacks.
Third offense six for the crime plus the previous twelve, total eighteen whacks.
And so on.
Even the most stupid scrote should be able to see the emerging pattern and the expectation of what is coming next.
Cost- minimal.
Time taken, from leaving the dock to being turfed out onto the street 30 minutes.

@ Penseivat What you say is true. Back in the early 1970's I got 70 days in RNDQ's, there was no remission there in fact I ended up having 73 days. The extra 3 were for the time I spent in the solitary cell on bread and water, seriously that happened. I could write a book about that place, however once out and on a plane to the Caribbean I decided it was a place best avoided in the future.

Good God man, what did you do to get 70 days over the wall !
28 days was the norm, followed by 42 days if you'd really cocked it up, but 70 days - good grief. I was working up at Fort Southwick as a 17 yr old baby Radio Operator and was in Vicky Barracks overlooking Deeks. I felt sorry for the poor sods in there. Up at O' 5 sparrow fart, scrub yer cell out, 7 fags per day (and you had to give the butts back), doubling everywhere, eternal kit musters and God only know what else

I can only imagine that Colchester for the pongoes and crabs was grim, but Deeks was always painted to us as very Hell on Earth, staffed by evil PTIs and Reggies.

I can't say that I was an angel (I wasn't), I just never got caught, but Deeks put the fear of God in me.

Anyway, that sort of punishment would be ideal for our transgressors - especially those from the RoP

@ rapscallion, It started off with 28 suspended for 12 months but just before that expired I got a cider fueled 42 and they were both then joined together. It was 2 fags a day might have been 3 can't remember. Assault course every morning. Half the day PT the other half rifle drill, all done at the double every thing all day at the double. Rifle drill was using 303's, difficult when all the movements had been learnt with an SLR, mistakes had you doubling round the parade ground with the rifle held out horizontal to the side, if your arm started dropping down they'd give you another rifle to hold out at the other side to balance it up, hilarious. No talking to anyone apart from staff, "communicating" got you put on report, that place turned out some pretty good ventriloquists.There was much more it was a well planned itinerary. I felt sorry for the 53 class they were the recidivists they got all which we did but more so.

another wonderful 'history' post. Love it. I wonder if many of those luvvies know what their pads are built on.

I see there are a lot of very naughty navy boys on here. I was in the ice house twice, laces out, triple time, srubbing toilets, beastings, the works. the 2nd time actually the root cause of my medical discharge from the paras...not intentionally by them or me.

Cider fuelled 42 - love it :-) Oh, we've all done that. I remember that malarkey with the 303s from my time at England's first, last and only concentration camp - HMS Ganges. Slightest thing, the GI would have you doubling round Nelson Hall arms outstretched holding that blasted 303. Staff had a mind for all sorts of unusual punishments, like scrubbing out the Long Covered Way with your toothbrush in your overalls on a bitterly cold November morning at 05:00. The SS had nothing on our Instructors. Tell you what though, I left that place fitter than a butcher's dog and hard as nails - you had to be or you didn't survive the place. Strangely I look back on it with certain twisted fondness. How daft is that? Snowflakes today wouldn't last 5 seconds in that place.

I'm beginning to think it's the 17th Century again ...

Your calls for a return to the Ducking Stool would need further regression still, however.

A guy was murdered near me over Christmas
Two people hit him, he fell down and died, they ran off.

6 years and 4 years.
So three and two with automatic early release, probably less than that.