It's all about China

Let's not forget where the Wuhan virus originated. Despite a highly co-ordinated campaign that in the UK has roped in the usual suspects including Sadiq Khan and David Lammy, the public are stubborn in continuing to say and post that this virus comes from China. Even parts of the UN (no surprise) have launched a campaign to tell us that the Wuhan virus is the result of deforestation and global warming, and it's nothing to do with eating bats or wet markets at all.

But sometimes there are no heroes and no villains. I wrote a post recently that regarded China favourably in airfreighting vital medical kit to Italy at a time when France and Germany had banned sending such stuff and the EU was deaf to Italian appeals. As usual, one well-informed commentator added the necessary perspective to the piece. No, neither China nor the EU deserve congratulation. Neither are heroes, both have damaged Italy. I read it wrong.

Where I stand absolutely shoulder to shoulder with Sadiq Khan and David Lammy is that this is not the fault of people from China who are working and raising families in our communities. Perhaps if they'd had the balls or the sense to say so instead of excusing the People's Dictatorship of China then their message might have been more widely heard. Any attacks on or discrimination or harassment against Chinese people is inexcusable and unacceptable. The irony is that many, at least in London, will be those and the descendants of those who have fled the PRC.

The Chinese government, bless 'em, having precipitated a global pandemic and millions of (coming) deaths by first trying to hide then lying about the Wuhan virus are taking a lesson from the EU in using this as a 'beneficial crisis' to tighten the Belt and Road bonds with Italy and drive a wedge between the country and the rest of Europe. The 'Chinese School' cartoon below has recently surfaced on social media. Well, sorry, guys - this sort of crude propaganda may play well amongst the third world, but Europeans remain amongst the most politically sophisticated voters in the world, and this just makes China look crude and silly. 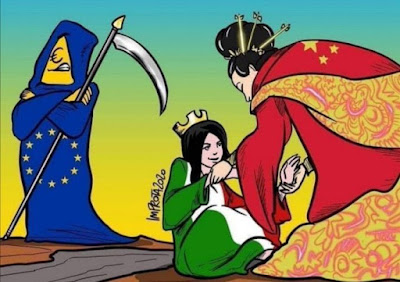 I assumed the Labour Party's deafening silence over the past few weeks is because they are trying to work out how on earth the Jews managed to plant a deadly virus in the middle of China. Couldn't possibly the fault of a Communist State.

When it comes to China supplying the Italians with vital medical equipment to help treat the victims of the Corona-virus (when their "partners" in the EU refused) my reaction was "it's the least they could do."

When we get back to something approaching normality, the Anglosphere should exert maximum pressure on the Chinese to clean-up their internal health practices. And that should include scrapping any involvement in the 5G network.

Dee Dee, the Chinese have banned the sale of all wild animals for food except for fish and seafood.

They accept that such trade will, in part, go underground however, so it becomes a crime prevention matter for them.

Europe and the US will depend upon China's actions to control this epidemic in Africa too, there will be little that we can do for some time.

This is not a time for mudslinging.

The European Union institutions have no medical resources nor civil protection authorities. They are sovereign matters for each nation - would you prefer that they were not? The UK has nothing even called the latter, however, unlike most member countries.

I wonder what you would say if the UK were sending our scant supplies of ventilators etc. to other countries just now?

If I may Raedwald?

Not the Chinese people but the nasty evil Chinese government that covered it up because to these whelks, saving face is more important than saving lives.

It is interesting to compare the globalist treatment of the nationist President Trump who can do no right, to this nexus of evil to which our resident nasty little troll JPM is so enthralled.

"This is not a time for mudslinging."

First take the beam out of your own eye.

I believe the wild animal trade is already illegal in China, but hasn't been enforced.

Stricter enforcement would indeed drive it underground. The Chinese have centuries of experience in evading laws imposed by authoritarian governments. The trades in ivory and rhino horns are still active, and more profitable (per gram) than ever.

Eating wild animals is widespread in Africa to. Going out to hunt was the normal way of getting food until relatively recently. Wild duck, deer and rabbits are still eaten in Britain.

It seems to be safer to eat vegetarian animals than carnivores.


The talk of wild animal consumption predicates the belief that the virus originated thus when it clearly came from the nearby bio facility (occams razor and all that) so let's not go there over what they eat. We get enough grief from our own veggies.

The virus situation is a 'good way to hide bad news' and should not be taken at face value. Current levels of infection/death equates to around two people per hospital across the whole UK - this assuming all 2000+ infected people are actually hospitalised (they clearly aren't) so the hospitals aren't under stress as I understand it.

China as a dictatorship is no better than that of Western governments disregard for peoples rights and freedoms (albeit on a different scale) so we shouldn't preach as 'innocents'. It appears to me that the Chinese model is one the West aspires too (witness the facial recognition stuff being rolled out) - stones and glass houses etc.

Little is heard of the 5 American soldiers in wuhan 2019 that were hospitalised with symptoms that now appear to be virus-like. But that would be to ascede to the conspiracy theory slur and we can't have that now, can we?

Stop peeing your pants Radders --the Puny Plague isn't going to kill any millions. It isn't even that dangerous to the elderly so long as they are in good health.

The vile beliefs of sewage like Cheese and Jim have already murdered far more than the crappy virus ever will.

Ecky, the British Empire alone among empires is estimated to have caused 1.6 billion excess deaths over its centuries, and then there's religion...

Despots call themselves all sorts of things, such as "holy", "democratic", "socialist", "modern", "patriotic" and any other virtuous titles that they think they can grab.

I'm on the conspiracy bandwagon too, the reaction is just so huge and seemingly idiotic that either it is a distraction or a massive global dry run for the real thing...a real killer bug

DeeDee99 "First take the beam out of your own eye"

He's got the whole framework in there!


Dave_G "so let's not go there over what they eat. We get enough grief from our own veggies."

So had the British empire not existed the world population in 1900 would have been 3.2 billion?


Just back from the wholesalers and a chat with the butchery department head (had to 'special order' chicken in 'cause of dickhead once-in-a-lifetime buyers cleared the shelves) and even he thinks this virus scare is a cover for the economic collapse - him as much as MANY people I talk to on a daily business sense.

This is pathetic and heads need to roll for the angst and fear mongering that is clearly exaggerated and upsetting people.

Quite frankly I'm going to stop even believing the 'death' figures they bang out with apparent glee at 6pm every night. 500,000+ die annually from various causes and an extra 200 by whatever cause isn't even statistically registerable. This is all utter BS.

Get your cash out the banks while you can.

@JPM - don't disregard the lives SAVED by the British Empire by virtue of the medical and sanitation improvements they took around the world with them. Probably cancels out your specious claimed number of deaths anyway.

Poland has kicked ass and published guidelines for the immediate clinical use of Hydroxy-chloroquine + Azithromycin for patients with COVID 19. After 6 days 100% of patients treated with HCQ + Azithromycin were virologically cured (p-value <.0001).

The cartoon is labelled as improta2020. I'm not sure it's actually Chinese propaganda. Judging from what I've seen it's essentially a political cartoonist who has no great love of the EU.

Smoking Scot 17:34, am I the only one interested in the expression on the Italian girl's face as she is 'saved'?

Dave_G "@JPM - don't disregard the lives SAVED by the British Empire by virtue of the medical and sanitation improvements they took around the world with them. Probably cancels out your specious claimed number of deaths anyway."

I am sure that is what he meant, perhaps that is the 1.6 b extrapolated.

Steve 17:11, not sure how appropriate the stats are as surely very few cases but the P-value is impressive.


If, as many suspect, this is about an economic reset then people need to know and be vigilant about the system (they) try to bring in to replace fiat. Breaking the link between currency and BANKS is critical and the introduction of a Green Pound (government created/backed) would be the only practical and acceptable alternative.

Do we have anyone with the balls to bring this about?

Not all the time we have a bunch of socialists in government.

Of course they might be interested in introducing a green hammer, to pound us into the ground.