Just a few numbers this morning that are causing the grey cells to spark. First, the news story that Germany has broken its 'balanced budget' dirge and has committed to €356bn of new debt - some 10% of GDP. Already Europe is preparing for a forthcoming 'fire sale' of some of its largest industrial assets - and British hawks are circling, hoping to pluck up some tasty morsels. With Europe's Bourses having fallen 30% - 40% in recent weeks, many are on the edge. The protective Germans know the risk -

"We will not allow a bargain sale of German economic and industrial interests," economic affairs minister Peter Altmaier said on Friday. "There should be no taboos. Temporary state aid for a limited period, up to and including shareholdings and takeovers, must be possible."

You'll note that it is the risk to German and not EU assets that has prompted the volte-face. Some solidarity, mein Herren. Just for comparison, here are the global benchmarks of 10% of GDP ($s)


But Germany faces a dilemma. Save the Zombie banks or allow the stressed carmakers to use their liquidity to develop EV technologies? QE has left many big companies with fat cash reserves, and even German taxpayers will grumble if hard-working Max Musterman's wedge is thrown to VW whilst they are still sitting on their own cash-pile. Here's another chart 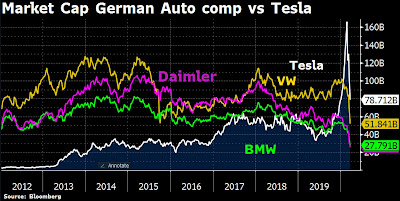 So VW hanging in there with a market cap of $52bn ... but here's where it gets interesting. As Bloomberg reports, VW is already sitting on a cash pile of $23bn - over 5% of the German chancellor's entire spending commitment. And the company would rather lay-off staff and close plants than spend it - foreign plants and workers to go first - as CE Herbert Diess was quoted as saying


"Drastic measures to protect liquidity" are required to tackle the crisis, Diess said Saturday in a message on VW’s intranet and later posted on LinkedIn. He said safeguarding the availability of spare parts and battery-cell supply are among the initiatives that are also "extremely important."

How this will play with German voters I don't know. But it's all getting quite interesting. One of the downsides of industrial socialism is that taxpayers will want a say in what is being done with their money.
at 06:55

As I noticed during my recent visit to the far north of Germany, at least in my everyday perception.

The imposition of all those nasty little hindrances that seem to cover these islands where land is at a premium and the population in cities is particularly intimate, is completely absent in Hamburg and Lübeck.

Smoking although restricted is allowed in most places, road humps do not exist, speed cameras and the endemic CCTV in every corner of the towns and villages is absent. So I don't see any reason why they should also ignore their imposed rules (on all the rest of us) regarding subsidy and support of lame duck industries, should be any different?

I have an out of date software version of TomTom on my phone, I did not accept their new rental model, and have kept using the one that I paid for. However, I had to use an alternative Czech app (Sygic) at one point because around Lübeck is a brand new motorway system that is absent from the former. This means that it is no more than three years old. Apparently Germans see no problem with building a bypass around their newly created UN world heritage city, for all those non-existent green cars, that will soon be all that is allowed in England.

I do not like Germans that much, I have experience of them during my former employment where lies were part of their idea of contract law. They are generally speaking without any sense of humour, and they clearly believe that they are superior to all other European people. They have never made good on their war reparations, particularly in the Mediterranean, instead they have systematically used the strictures of their EU-Mark (Euro) to undermine the southern economies.

We are all in this together.

And there, in 7 little words, is confirmation that the EU will never be able to create and maintain the Superstate it craves.

When push comes to shove, it's the interests of their own nations which will be prioritised. And the Germans, as well as the French, always have and always will.

However it plays with voters, at least every vote will count in Germany with PR. In turn that means that there is unlikely to be a large, step-function change in representatives for any radical party.

I should think that their priorities right now are the same as everyone else's, that is, to suppress this epidemic too.

I agree JPM, we used to get vaccinated but now TB is rampant again: deaths per day more than seasonal flu and malaria put together.

UK (well, England and Wales) deaths from respiratoty disesease is going down, of the 11K or so that die each week (from anything) the total number from respiratory problems is falling. Seasonal norm or effect of measures and people mixing socially less than before? Should be interesing number sto crunch Raedwald?

Oddly, it was NZ that showed what their statement means in practice. NZ airlines sought government assistance and got it on the basis of a government stake in the business. In short, pretty much the same as Brown did with RBS and Lloyds. We'll see more of this as well as forced amalgamations.

What's most sinister is our MLR is down to 0.1%, and we had a tiny wriggle room. The EU does not, their MLR equivalent was negative anyway and the new Boss says she'll do it by simply printing money that'll take several generations to get from under.

@Span Ows: great find, well done. I may use this elsewhere. Why should we regard the annual butchery by flu as normal?

With the explosion of public debt Germany is going to have to agree to debt mutualisation in order to keep the Eurozone together. The price will be iron control over the debtor economies going forward. Greece has already shown what this looks like. Pity those poor souls that will experience German rule twice in a lifetime.

Surprised to learn that Russia have sent a great deal of kit as well as trained personnel to assist Italy in their efforts against the virus.

And none of those tiddly little spraying machines, pushed by one in a plastic suit. No Sir, one thudding great truck with a really, really big reservoir and nozzle with an enormous reach.

Not sure our MOD can match that, nor the aircraft they used.

I'll be switching on my WTF-ometer when covid deaths get anywhere near that number.

I think we still get tb vaccination, but if people arrive after with it, and refuse treatment, or refuse to complete treatment, short of leper colonies, theres not much to be done.
Beyond dont live in London where you could catch XDRTB.