We can NEVER trust these shameless Liars

The Daily Remain dignifies their perfidy by terming them Hypocrites - but as Brendan O'Neill wrote, in reality they are no more than Liars. 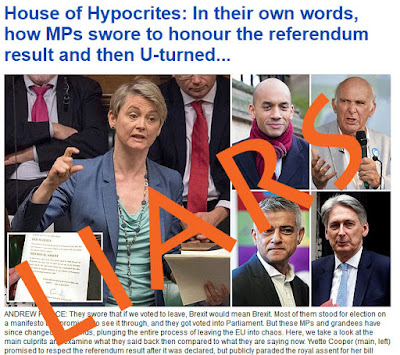 These are the rogues, the crooked chiselling worms, who want to impose a system of censorship on the internet to regulate truth-telling by the public - yes; this cabal of meretricious deceivers who cannot open their mouths without gushing a foul stream of noroviral bowel content think they can impose their crooked falsehoods on the British public.

We don't need a White Paper to sort out their lying sleaze - we need an election to cull them!

Update
======
Well, I missed it. Yesterday morning I noticed our 4 millionth visit was coming up and thought I could catch it this morning. However, overnight it came and went. So, erm, please join me in raising a glass to having achieved 4,000,431 pageviews

Some of our most popular posts include

But the outright winner is..

Congratulations on your page-view milestone Raedwald. In a strange way you - and fellow bloggers- should be flattered by the Establishment's censorship plans. It's a testimony to your success; their fury and their fear of your "disinfectant of sunlight" power.

Congratulations, Raedwald. You have nearly as many views as I do disapprovals, for my one-liners in the Daily Mail's comments section!

The fact that we are being led by liars - and seemingly allow them to get away with it - illustrates the corruption of the whole system. When even those who have better 'manners' (i.e. don't lie) refuse to stand up and accuse the trangressors for their corruption where do we go?

We are being left with only one option and that is to take back control ourselves - force change even if this is to be by violent means.

It's not as if our representatives haven't been warned or don't know/appreciate what they are doing but if we simply roll over and allow this to continue then where does it stop? The 3am knock on the door can't be too far away.

But, as ever, the MEDIA are the real problem. Our Politicians wouldn't dare to do as they do if the media stood up and told their readership what was happening and argued against it.

The media can get 'hundreds of thousands' of people aggitated enough to force the elimination of PAPER STRAWS for fucks sake yet our elected leadership, LYING to us, BETRAYING us, working for subversive causes (Soros/Globalism), STEALING from us etc, etc and what is the media response.... sod all.

The internet tells it more like it is and, of course, it is now under attack but where/what is the media response? Well, given that it is THEY who are most affected by the internet you just know that THEY won't give a rats arse as 'they' will become the de-facto source for 'the truth'.

If we're to resist the upcoming enslaught of censorship then we need to start NOW and finger those responsible for keeping the truth from public ownership. More articles on media corruption are required.

Congratulations on the milestone.

I look forward to your continuing to fight the good fight !

Liars yes,and more yet.
Conspiracy mode ON.
2016 unexpected win on brexit vote.
2016 U.S. intelligence agencies start illegal operations against then candidate Trump.
These illegal operations included U.S. agents working in the U.K. and help from an *ex* British agent (cats paw), and questionable unexplained (as yet) use of the 5 eyes arrangement.
The eu and of course the remainer PM May would have much preferred the next U.S. president to have been the avowed globalist Clinton rather than the free trade nationalist Trump.
The eu is terrified of the U.K. being free to strike up good trade deals with the U.S.
Clinton lost, it's taking a long time to sort out what went on but by the end of the year or early next, the tits will be fully elevated skyward and the traitor May plus others will be in an awkward position.
And quite frankly I hope Trump sanctions both us and the eu into oblivion.

Congratz on the 4 million, however i'm surprised that it was the 'celeb' post that got the mostes hits. Was it people on the day googling to get details and landing on your blog, do you think?
Seems a little unfair to me that an off the cuff and whimsical post such as it should receive so much attention when you have written some really good stuff over the years, posts which have obviously taken some thought and which had something worthwhile to say. Yes I'm thinking of those 'Suffolk' posts you linked me to among many others.

Thx jack - yep https://raedwald.blogspot.com/2012/12/botwulf.html is a poignant post; my wonderful and much beloved sis in law died of the big C, since when all the magic has gone out of Christmas.

Yeah people look at crap. A top ranking post I didn't include above titled 'Women with large tattooed breasts' also has 10k+ hits - and some very disappointed adolescent boys I imagine, since it's about cosmetic surgery on the NHS

Many congratulations Raedwald. I lag some 75% behind. Justifiably!

And yes, they are bare-faced liars. The nerve is unbelievable, almost as if they are inviting action against them.

Congratulations. You have amassed a small army, use us wisely.

I should have perhaps said that my millions of Daily Mail red arrows were from 2014, mind.

It is indeed. Infact I hope that one of the upsides of Brexit finally happening or definitely not happening (who knows? Who still cares?)will be your return to penning such quality posts and not just posts whinging on about how Leavers have been shafted by Westminster

we need an election to cull them! Really/ You think the answer to politicians is MORE politicians? Do you really believe, say, JRM himself if he were leader of our current minority government with 2/3's of the Commons agin 'No Deal' would fare any better than the Maybot?

Daily Remain I assume is the that laughably-called-a-'newspaper'-rag previously known to all as the 'Daily Heil'? If so one glance at its cover this morning tells one everything one needs to know about this septic isle. Half the front page is given over to the impending humiliation of our PM and our nation this evening. If the EU grant us an extension then only because they had May do her epileptic dance on the table top in a pink tutu playing Ode To Joy on a recorder. This is where the plastic patriotism of the Brexiteers has brought us. Heseltine was dead on the money and Maggie would be turning in her grave.

However the more important NEWS according to the Mail is that MEGAN WANTS A HOME BIRTH!

Now Jack, the Megan disclosure adds weight to the conspiracy theory that she is not even up the duff.


Now Jack, the Megan disclosure adds weight to the conspiracy theory that she is not even up the duff.

I should imagine that the weakness of the Royal Blood line and the 'specialness' of their genepool these days will result in any spawn ripping itself out of Megan's chest before taking out the SAS team sent to guard the Royal Birth.

It's the remainiac parliament that has got us into this position as you well know.

And what is this position?

Looking at May, one is reminded of Quisling sucking up to the fuhrer in 1945 totally oblivious that his reich was on its last legs.

You are right though Jack in that even if there were mass protests on the streets, it likely wouldn't penetrate the depleted uranium, mile thick skulls of the remainiac establishment.

There is a storm coming in Europe which none of them will be able to stop. In the words of bomber Harris "those who sew the wind reap the whirlwind".

I wonder how many enthusiastic remainers we'll have in 10 years, or even 5?

Still Rome wasn't knocked down in a day - right?


As the small armies muster and the call to arms will come.